With the increasing penetration of distributed generation (DG), the electric utility system in the U.S. is becoming more complex with every new project added to the grid. Among the most popular DG projects are solar and battery storage. With increasing concerns over climate change and reducing carbon footprints along with dramatic cost reductions, renewable generation has seen a surge in popularity and penetration in the U.S. grid. The renewable resource that has gained the most traction has been solar – the sun shines everywhere. The general trend for solar resources is that prices steadily decreasing and usage has been steadily increasing. Prices now are about 25% of what they were 10 years ago and solar penetration is expected to only increase in the future 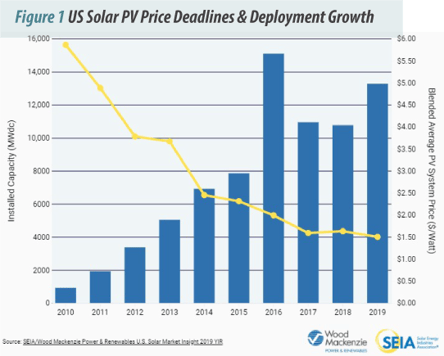 There are two key types of ground-mounted solar technologies: fixed and single-axis fixed-tilt technology. Solar panels are mounted in a “fixed” position, facing south in order to maximize the solar irradiance as the sun moves from East to West throughout the day. A fixed-tilt solution may be advantageous when addressing sites with challenging geotechnical conditions, as they may be better able to follow the terrain. Fixed-tilt designs tend to be the cheapest option when installing solar at a they contain minimal moving parts needed to generate electricity. The single-axis tracker solar technology solar technology mounts solar panels to a racking system that rotates throughout the day to track the sun to maximize the solar generation. Single-axis tracking is least expensive when installed in long rows, so when considering a site with an irregular boundary, fixed-tilt solar panels are the more flexible option. While single-axis trackers are more expensive than fixed-tilt designs, the additional solar generation produced can usually offset the
incremental cost of the racking system.

Regardless of the solar technology utilized, the solar panels can be monofacial or bifacial. Monofacial modules are composed of traditional sun-facing, one-sided solar panels, while bifacial modules produce power from two-sided panels. This way, bifacial modules are exposed to direct sunlight as well as the reflection of sunlight on the ground. Bifacial gain is highly affected by the albedo, or reflectivity, of the surface underneath the module. Bi-facial modules are generally the more popular option as they decrease the levelized cost of energy by increasing power production by 5 to 30 percent, depending on the albedo and system configuration.

One benefit of solar facilities is they can be used for behind-the-meter generation. For many utilities, this means having the opportunity to peak shave, which involves reducing their coincident or non-coincident demand during peak hours. Those peak hours can be correlated to demand and transmission billing determinants and reducing those associated costs.

Another benefit of solar generation is relatively easy siting at various locations. Solar panels can be placed in farms or even brownfield sites. Other solar options that are popular today are rooftop solar, used at the residential, commercial and industrial scale as well as canopy solar, which is utilized in parking lots. Aside from the general benefits of solar, rooftop solar and solar canopies. Rooftop solar and solar canopies are efficient uses of land that are already in use. However, rooftops are not always well-suited for solar panels. The U.S. Department of Energy found that although 83 percent of small buildings have a suitable location for installation, only 26 percent have a total rooftop area suitable for development. Therefore, solar canopies are a valuable solution when a company is looking to utilize open space while eliminating issues with roof angle, orientation, and size. The solar panels themselves comprise the canopy (rather than building panels off another structure, such as a rooftop), which allows for the freedom to choose ideal tilt and structure.

Renewable energy sources are undeniably important agents of progression towards sustainability, but they also cannot guarantee power production when needed the most. Battery storage provides a solution to this challenge by displacing the energy from times of lower demand to periods of higher demand.

In 2019, battery storage penetration in the U.S. hit a record high with 522.7 megawatts installed over the year. Energy storage is not only being utilized in California, but advanced in front-of-the-meter storage has been adopted in 35 states. Battery storage installations are expected to triple this year and double the year after (see Figure 2). 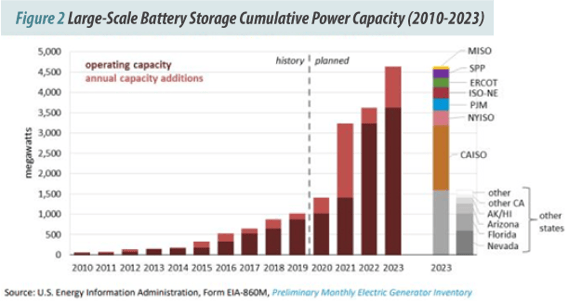 The most prevalent type of battery storage is lithium-ion, which is a rechargeable battery with several varieties of specific chemistries. Although lithium-ion batteries are expensive, their costs have decreased dramatically over the past several years.

Lithium-ion batteries have high energy density, voltage capacity, and a relatively low self-discharge rate. On the other hand, the main concern for these types of batteries is the age-related capacity deterioration. Additionally, they require protection and are sensitive to high temperatures, as exposure to heat causes faster degradation. Another potential commercial battery storage technology is flow batteries, which operate by storing charge in tanks of electrolytes. Flow batteries are not yet commercially available, but they claim to have slower degradation, be safer, and last for a longer duration than alternative battery storage methods. Their long duration and large storage capabilities are owed to the scalability of the flow battery tanks to meet energy demand. However, challenges include a relatively low energy density, a low charge and discharge rate, and the high viscosity of the electrolytes flowing through the tanks.

In CAISO, there is an oversupply of solar energy during the middle of the day that drops off in the evening when demand peaks – referred to as the “duck curve”. This results in a rapid increase in demand on the grid at the end of the day where CAISO must dispatch other resources to meet the demand. Battery storage paired with solar is one potential solution to solve this problem as the mid-day oversupply of solar power could be captured and used later in the day during when demand is higher and solar production is low (see Figure 3).

Another benefit of battery storage, similar to solar, is peak shaving. Battery storage technology has become increasingly cost effective and can be dispatched very effectively during peak hours. For peak having efforts, utilities charge batteries during the off-peak hours when electricity rates are low. The battery is then discharged during on-peak hours when electricity prices are at their highest. This can also result in reduced billing demand, ultimately reducing transmission and or demand costs.

Another primary use case for battery storage is system reliability. While some power plants can take minutes or hours to ramp up or down, battery storage can be dispatched in seconds, allowing for continued electricity reliability to customers. Batteries can also assist in providing reliable services by deferring or circumventing the need for transmission and distribution upgrades. By meeting peak demand, battery storage can reduce congestion and improve the utilization of transmission and distribution assets.

Of all renewable energy resources, solar energy is expected to grow the fastest in the United States over the next 30 years. As this technology continues to advance, the cost of solar energy will likely continue to decrease. Solar generation can be used behind-the-meter and can assist with peak shaving and meeting Renewable Portfolio Standards, while being a lower cost option and easier to site. Battery storage can assist in redistributing solar to times of the day with higher demand, whether it be to shave a utility’s demand peaks or to provide system reliability. While these are important benefits of solar generation and battery storage, even more benefits and use cases exist depending on the utility’s needs. 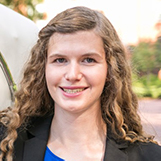 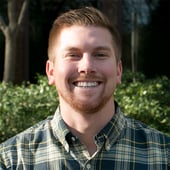