SEEM Update - Where Are We and Where Is It Headed?

When word of the proposed Southeast Energy Exchange Market (SEEM) hit the presses, it created instant buzz as the entrenched vertically integrated utilities of the Southeast, to the surprise of many, appeared to be taking a step in the direction of a centrally coordinated wholesale market such as an Energy Imbalance System (EIS) or Independent System Operator (ISO) market. However, upon closer inspection and to the disappointment of some, many soon realized that SEEM is merely an extension of the existing bilateral market which adds an additional 15-minute interval for bilateral transacting while retaining the same pre-existing transaction infrastructure, e.g., e-tag interchange scheduling tools, bilateral enabling agreements, and individual point-to-point transmission tariff reservations.

In response to those hoping for an ISO, SEEM Members pointed out that their proposal combines a novel zero cost 15-minute transmission service product and automated algorithmic matching of bilateral bids and offers, which will save its Member load serving entities more than $40 million a year. Further, SEEM Members trumpet that the new 15-minute market will allow for better incorporation and management of intermittent renewable resources. Unsatisfied, renewable and environmental groups intervened in the FERC docket, urging FERC to reject the SEEM application on the grounds that the SEEM proposal solidifies the status quo. This push back teases out several questions which this article addresses in turn below:

What does SEEM mean for Renewables?

Foreseeing possible scrutiny from renewable proponents and FERC, the SEEM Members made sure to highlight that half the savings generated by the SEEM market will derive from better accommodation of renewable resource intermittency—principally solar. A deep dive into the SEEM cost-benefit analysis submitted to FERC reveals that most of the anticipated savings arise from better management of the incumbent utilities growing solar ramps at sunrise and sunset. The hopes are that the availability of 15-minute interchange schedules will allow utilities to feather in shorter interchange transactions to reduce the amount of operating reserve headroom that utilities have to carry on dispatchable resources during extreme morning and evening solar ramps.

The selling point to environmentalists is that the extra 15-minute interchange tool will allow utilities to further build out their solar portfolio, while providing a mechanism to help mitigate the increase in operating reserves that comes with intermittent generation. On the flip side, the SEEM study conceded that SEEM will do little to help with minute-to-minute intermittency of solar as cloud banks roll over. Any potential IPP renewable project will still be exposed to tiered Generator Imbalance Service tariff charges resulting from minute-to-minute schedule variances, as asset managers who see a near instantaneous drop in solar output in real-time will still face difficulty in reforecasting solar output for the next 15-minute bid interval— especially considering that the drop in solar output may only be for a few minutes. Comparatively, EIS markets clear all solar variances at the posted marginal clearing price for that interval without exposing the resource to tiered generator imbalance rates which tend to become more punitive based on the degree of variance from scheduled output.

Thus, environmentalists do not view SEEM as a solution for renewables, but rather, a solution for incumbent utilities seeking to build more solar while leveraging their pre-existing bilateral contract infrastructure. Many SEEM members have been doing business with each other for decades and already have the necessary power enabling agreements, credit support facilities, and transmission service agreements in place for participation in the bilateral market. Environmentalists argue that these required agreements serve as a barrier to entry which helps SEEM Members maintain their incumbent status as the builder, owner, and operator of utility scale assets.

Is SEEM an Intermediate Stepping-Stone to an EIS or ISO Market?

As the environmentalists noted in their FERC filed responses, SEEM does not do away with the contractual and credit barriers to entry mentioned above. Accordingly, the challengers to SEEM are pushing hard for FERC to reject SEEM and, instead, maintain the pressure on SEEM’s Members to form a more renewables friendly ISO. The big question for those that have lived through the transformations of traditional bilateral energy markets to organized EIS and ISO markets is whether the key stakeholders, namely Southern Company, Duke and TVA are sticking their foot onto a slippery slope which ends in an ISO. Most Southeast market insiders remain skeptical. Pro-ISO prognosticators have been saying for decades that it is only a matter of time before the ISO model swallows up the southeast. For decades, the prognosticators have been wrong.

As Southern Company argues, they already functionally operate as a regional pool when you consider the various operating company subsidiaries they maintain in each state, whose assets Southern dispatches and optimizes jointly under their intercompany interchange contract. Further, anyone who has ever toured Southern Company headquarters, and has seen their project memorials, can vouch for the pride Southern takes in being the builder, owner, and operator of utility scale megaprojects, which can only be built when you have guaranteed retail customers assigned via state territorial statutes. Nodal ISO markets, and their tendency to attract retail choice, are simply not conducive to Southern’s billion-dollar capital investments in megaprojects (e.g., the nuclear expansion at Vogtle and the Kemper coal gasification project attempt in Mississippi).

Further, when you consider the struggles of nuclear units in the northeastern ISO’s, it is highly remote that Southern Company has any interest in subjecting its ongoing $24 billion plus nuclear investment at Vogtle to ISO-like market forces. An appealing attribute of SEEM to the leadership at Southern, TVA, and Duke, who bring the critical mass necessary to make SEEM viable, is that it demonstrates to regulatory bodies that they are staying progressive from an IT automation and renewables standpoint, while simultaneously clinging to the current bilateral market infrastructure that provides them with the stability they covet. If SEEM turns out to be even a moderate success, as measured by participation and cleared transactions, it will only serve to help cement the case for the status quo amongst the leadership in the region, who love to trumpet the reliability of their systems compared to the issues that have plagued organized markets in CAISO and ERCOT.

On May 5, 2021, FERC responded to the SEEM application with a Letter of Deficiency seeking answers to select questions. Most of the questions involved oversight and data reporting, with many of the questions simply asking for clarification of vague references and terminology. Missing from the Deficiency Letter were any explicit questions with a critical eye toward market rules or algorithms. This is not surprising considering that SEEM is simply an expansion of the existing bilateral market. In their filed response to FERC’s Deficiency Letter, SEEM members highlighted that the existing regulatory oversight currently in place will continue (e.g., state Public Service Commissions and FERC oversight of MBR tariffs and OATT’s). Since then, the environmentalist and SEEM members have each made subsequent filings containing arguments for their respective positions. A key decision point will be whether FERC grants the environmentalist the technical conference they are requesting
to air their grievances. Considering that SEEM covers eleven states served by some of the largest utilities in the business, odds favor FERC granting a technical conference but that will depend on whether FERC is buying SEEM’s participants arguments that SEEM is a simply an additional trading window for an already existent, regulated market.

With respect to which way FERC is leaning with approving the SEEM application in its entirety, it is always difficult to read  the FERC tea leaves because of ex parte rules which muzzle interaction with FERC staff on disputed issues. On the one hand, SEEM does not take a serious step towards FERC’s preferred ISO market structure which would grant them enhanced regulatory influence. On the other hand, FERC must give some credence to SEEM Members’ claims that the proposed market will allow better incorporation of renewables, which is a top initiative for FERC.

Considering the entrenchment of the bilateral market in the southeast, as well as Southern’s commitment to Vogtle which has been heavily subsidized by the federal government, it is unlikely an ISO is in the near future for the Southeast. Thus, FERC may settle for the next best thing, which at this time appears to be SEEM.

WHAT IMPACTS WILL SEEM HAVE ON THE EXISTING BILaTERAL ENERGY MARKET?

Assuming SEEM gets approved, what impacts will SEEM have on the existing bilateral market? The answer is probably not much. However, it is worth noting that SEEM participants stated in their FERC filing that the 15-minute SEEM market may cannibalize some of the existing hourly market liquidity. This possibility is due to the zero-cost 15-minute transmission. The SEEM market footprint spans from the Carolinas to Missouri. Multiple point to-point transmission wheels are required to move energy from its eastern boundaries to the Midwest. Many hourly transactions which would only make a buck or two per MWh will be much more profitable if pancaked transmission cost can be avoided by selling into the 15-minute SEEM market.

Furthermore, the SEEM participants’ public posture is one of full commitment to the success of SEEM. If the SEEM Members want to ensure the 15-minute market succeeds at all costs, then the thrust of their participation in the real-time markets may shift from the hourly market to the 15-minute market. Thus, hourly market liquidity is certainly an area to keep an eye on. 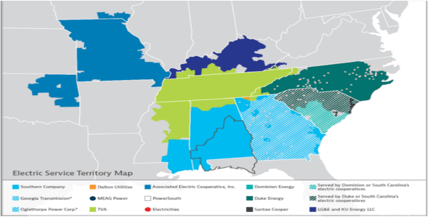