Resiliency of the electric distribution grid

Our society is heavily reliant on electricity and plans for sustainable energy have put more emphasis on the electric distribution grid to provide reliable power to retail customers. The electric grid of the near future will need to deliver additional
power for electric vehicle charging, provide a reliable platform for distributed energy resources to help replace fossil fuel dependence, and continue to provide increased connectivity for the Internet of Things (IOT). All of these things are heavily dependent on a continuous and reliable supply of electricity.

Today’s electric grid is really pretty reliable. National surveys of utility reliability statistics by IEEE and NRECA shown that the average duration of an outage is only 90 minutes and, on average, customers experience only one outage per year. Said
another way, power is available to customers 99.98% of the time in any given year.

But there remains a continued focus on resiliency in the electric industry – which is the ability to prepare for and adapt to changing conditions as well as withstand and recover rapidly from disruptions. Resiliency goes beyond an occasional power outage, but rather concentrates on major disruptions that can affect an entire community or region. Hurricane Ida is a more recent reminder of how vulnerable the electric grid is to a major storm event, but major disruptions can also include tornadoes, wild fires, floods, and ice storms. Some studies suggest Climate
Change is increasing the frequency and severity of these events, but at a minimum, as populations continue to grow then more and more people are impacted by these major disruptions. 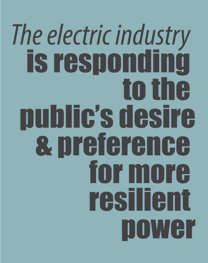 The electric industry is responding to the public’s desire and preference for more resilient power. One way this has been expressed is by the increasing frequency of new rules from regulatory agencies based on studies and recommendations from successive White House administrations. It can also be seen in the media headlines following catastrophic events where the hardships from lack of electric power can hamper a community’s recovery.

A first step in the process is developing a resiliency plan which includes: (1) a vulnerability assessment, such as the likelihood of adverse climate events, (2) the thresholds at which conditions are likely to affect important assets or overall system performance, and (3) the costs or consequences of those adverse climate impacts. The resiliency plan prioritizes a set of actions or resiliency measures to mitigate critical vulnerabilities. The range of measures often include, system hardening to limit initial damage to the system and utilization of techniques that
allow for quick restoration and system recovery.

Some common strategies include storm hardening. Storm hardening goes beyond the strength requirements of the National Electrical Safety Code (NESC) that provides performance requirements for the pole strength that is considered safe for the protection of the public and utility workers. Unfortunately, the NESC is not focused on hardening nor resiliency, but rather safety codes. Utilities often will employ higher load (strength) factors such as using Grade B construction for the distribution lines similar to transmission lines. In Florida, many of the electric utilities are using the 50 year mean recurrence internal for three second wind gusts (also known as the extreme wind map in the 2017 NESC) for developing specific loading of distribution poles. Using this increase loading, coupled with higher load factors, results in more extreme infrastructure and could also result in a system
that is hardened from hurricane force winds.

Another storm hardening strategy is to identify critical poles on a feeder system. These would include the first pole outside a substation and poles supporting three-phase reclosers or normal-open switch poles. Loss of these critical poles can result in longer outages and outages affecting more customers due to the impact of more than one zone of protection. Along these 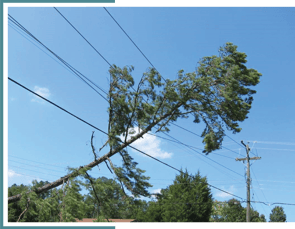 same lines, the use of fiberglass arms can be employed because they have a greater strength than wood crossarms. Then those
crossarms, and the supported power lines, may be less likely to break during ice storms or when trees fall on the power lines.

Select undergrounding of electric lines is being used within some communities, but this option comes with significant costs and a perception of improved aesthetics for some customers over other customers. In the District of Columbia, Pepco is undertaking a PSC approved project, referred to as “DC Plug”, which has an ambitious goal to underground the primary lines to roughly 30,000 retail customers. Florida Power & Light recently received approval for their Storm Hardening Plan which includes a $10 billion /10-year program for undergrounding
laterals to feeders.

In the West, hardening measures include deployment of non-flammable poles. For wild fire mitigation, the utilities are also taking a more aggressive stance of vegetation management with the concern of falling trees or limbs causing power lines to fall and potentially spark a fire. The use of current limiting fuses is also a consideration to reduce sparks from traditional open cut out fuses.

Another common mitigation measure is to change the overcurrent protection scheme from a multiple reclose methodology to a single reclose scheme. Multiple reclosing has been used from many decades to maintain system reliability from animal caused outages and from some vegetation caused outages. Using a single reclose scheme results in more sustained outages but may reduce the likelihood of fire caused by multiple re-energizing of power lines that may be on the ground.

Resiliency of a distribution system is very dependent on
the transmission grid and central power sources. If the weather event adversely affects the transmission lines or generation facilities, the distribution system cannot provide power to the end use customer. A helpful mitigation strategy is the use of microgrids and/or distributed generation. These energy sources typically will not have the capacity to restore power to the entire 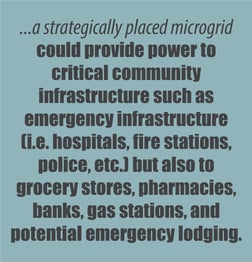 grid. However, a strategically placed microgrid could provide power to critical community infrastructure such as emergency infrastructure (i.e. hospitals, fire stations, police, etc.) but also to grocery stores, pharmacies, banks, gas stations, and potential emergency lodging. This type of deployment can provide critical services to the community as the utility focuses on permanent restoration of the distribution grid.

It is important to recognize the profound changes in the grid from technology enhancements such as Smart Grid, self-healing systems, and greater visibility of the distribution grid from utility control centers. These technologies improve real-time monitoring of the system and provide faster, more precise outage location information that can speed restoration and improve resiliency.

Improving resiliency for our community/service areas starts with a vulnerability assessment followed by a resiliency plan. These plans need to develop a priority for strategies unique to the utility along with the appropriate benefits and justified cost for the utility’s stakeholders/retail customers.