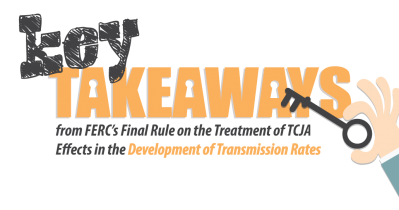 On November 21, 2019, the Federal Energy Regulatory Commission (“FERC” or “Commission”) issued Order 864, a final rule that addresses the impact of the Tax Cuts and Jobs Act of 2017 (“TCJA”) on accumulated deferred income taxes (ADIT) recovered under wholesale transmission rates (the “Final Rule”). In the Final Rule, the Commission imposed several new requirements for transmission formula rates, avoided making any generic rule(s) applicable to transmission stated rates, and generally guaranteed that treatment of excess and deficient ADIT will be an important consideration in transmission rate filings in 2020 and beyond.

A Primer on ADIT & Excess ADIT

On December 22, 2017, the President signed into law the TCJA and, among other things, reduced the federal corporate income tax rate from 35 percent to 21 percent, effective January 1, 2018. Under applicable accounting principles, ADIT must be accounted for by multiplying a taxable organization’s deferred taxable income, as evidenced by temporary differences in the organization’s book-tax basis, by the statutory tax rate at which the organization expects to pay income taxes in the future. Accordingly, the reduction in the federal corporate income tax rate, under the TCJA, caused taxable organizations to “write down” or reduce the value of their ADITs to reflect the reduced federal tax rate. For most taxable organizations, the reduction in ADIT was be reflected as a boost to reportable earnings. For regulated utilities, however, the reduced ADIT raised questions about whether customers should be refunded a portion of their deferred tax “prepayments,” which were collected at 35%
but now payable by the utility at 21%, and whether customers should reimburse their utility for the utility’s tax payments made at 35% but expected to be included in rates, under tax normalization, at 21%. Additional questions arose as to whether FERC action was needed to protect customers against losing rate base credit for excess ADIT, the portion of a utility’s ADIT written off to reflect the reduced tax rate under the TCJA. At that point, conversations about excess and deficient ADIT and tax gross-ups began echoing across the business offices of public utilities and down the halls of utility regulators.

Takeaway One: There Are Three New Requirements for Transmission Formula Rates

a. Rate Base Adjustment Mechanism 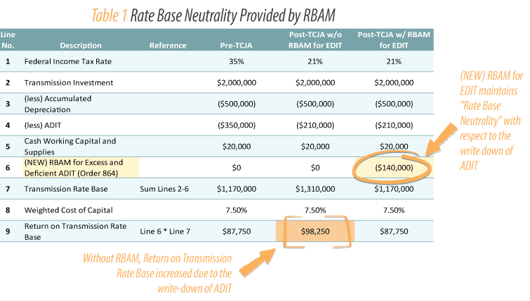 First, under the Final Rule, utilities with transmission formula rates must include a Rate Base Adjustment Mechanism (“RBAM”) in their formula rates, which is a mechanism by which utilities deduct any excess ADIT from or add any deficient ADIT to their rate bases. In other words, any change in rate base due to the revaluation of ADIT following a tax rate change must be offset by the inclusion in rate base of a credit for unamortized excess or deficient ADIT. As presented in Table 1, this new mechanism provides “rate base neutrality” with respect to the effects of income tax rate changes. Moreover, the Commission found that the RBAM was necessary to avoid violating the Commission’s policy on tax normalization.

Second, utilities will be required to include an Income Tax Allowance Adjustment Mechanism (“ITAAM”) in their formula rates to decrease or    increase the income tax components of their revenue requirement to reflect the amortization of excess or deficient ADIT, respectively. As presented in Table 2, the ITAAM will be the mechanism by which public utilities with transmission formula rates return excess ADIT to or recover deficient ADIT from ratepayers.

Takeaway Two: The Impact of Excess and Deficient ADIT on Transmission “Stated” Rates Will be Addressed in Future Rate Cases

With respect to transmission “stated” rates (e.g., rates that are fixed and not formulaic), the Commission relaxed its initial proposed rule in the Notice of Proposed Rulemaking (“NOPR”). In its NOPR, the Commission proposed to require public utilities with transmission stated rates to (1) determine the excess and deficient income tax caused by the TCJA, and to (2) return or recover such excess or deficient amount from customers. However, the Commission changed course in its Final Rule and found that applicable Commission precedent and regulation for stated rates supported simply deferring the issue of excess and deficient ADIT until the utility’s next rate case.

Takeaway Three: The Conversation About Excess and Deficient ADIT Will Continue in 2020 and Beyond

Perhaps the most obvious takeaway from Order 864 is that the conversation about excess and deficient ADIT is not going away soon. In 2020, utilities with transmission formula rates are required to make compliance filings to demonstrate their
compliance with Order 864. Each compliance filing will allow interested parties the opportunity to comment on the utility’s proposed RBAM, ITAAM, and ADIT Worksheet. Importantly, Order 864 established that certain aspects of a utility’s ADIT rate treatment, such as the length of the unprotected excess and deficient ADIT amortization period and the design of the ITAAM, will be reviewed on a case by case basis. 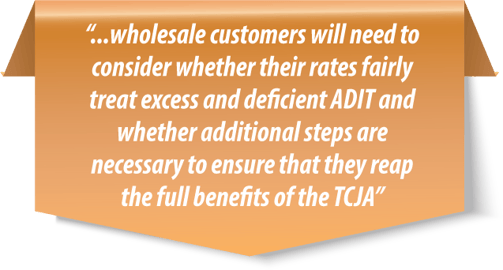 Importantly, Order 864 applies specifically to transmission formula rates, but the guidelines provided in the Final Rule may influence other FERC jurisdictional rates. For example, most of the concepts contemplated in Order 864 should apply to wholesale production and distribution formula rates, which are generally like transmission formula rates and contain cost-of service components to account for ADIT in rate base and the allowances associated with income taxes. Accordingly, wholesale customers will need to consider whether their rates fairly treat excess and deficient ADIT and whether additional steps are necessary to ensure that they reap the full benefits of the TCJA. 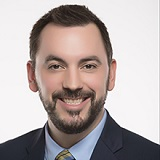