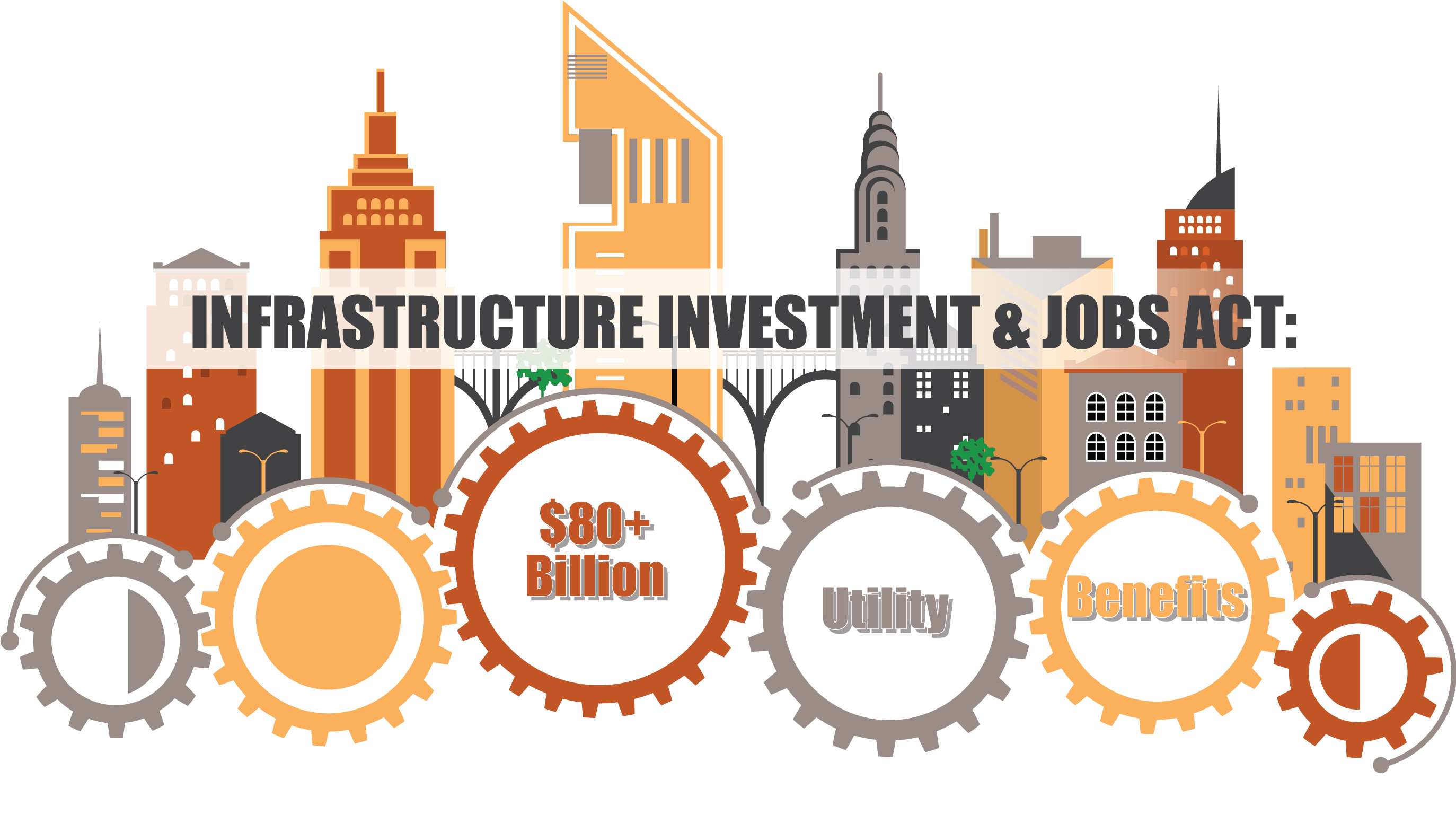 Recently, the United States Congress has been drafting the
Infrastructure Investment and Jobs Act (H.R. 3684) and
depending on the final version of the bill, there will be
potential impacts and benefits for electric utilities. The Act
contains over $80 billion in funding for energy programs
that directly or indirectly will benefit the utility industry,
the majority of which is to be expended between 2022 and
2026. The bill contains substantial funding for various
portions of the electric utility industry to support transforming the energy sector towards a net-zero carbon future, including:

With bipartisan support, the US Senate passed the $1 trillion infrastructure bill on August 10th, known as the “Infrastructure
Investment and Jobs Act” (Act). The legislation is now in the House of Representatives where it is expected to be passed by September 27th. It’s too early to determine what the final bill will be, but here is a general summary of items in the current draft legislation that are related to the electric industry.

The Act recognizes the importance of supporting smaller electric utilities which can struggle with funding large infrastructure projects. The Act allocates $1.0 billion to rural or remote areas, defined as having a population of less than 10,000 inhabitants, for the funding of cost-effectiveness of energy generation, transmission or distribution systems siting/upgrades, greenhouse gas emission reduction, electric generation modernization, microgrid development, and energy efficiency. The legislation allocates 30% of the transmission infrastructure
funding to utilities that have less than 4,000,000 MWh in annual sales. There is also $250 million allocated to small utilities for cyber security program funding.

The legislation includes significant transmission policy changes and funding, targeting the problems revealed in litigation of transmission siting that has occurred over the last several years. The bill attempts to fix the federal backstop authority in siting interstate transmission, allowing the federal government to override state-level permitting and establish designate transmission corridors based on current and projected transmission congestion. The nation’s aging transmission grid will need large investments if the US is going to achieve a net-zero carbon future by 2050. The Act includes $10.0 billion for improvements in transmission systems to reduce outages and improve resiliency. There is $1.0 billion targeted to rural and remote areas for transmission and distribution system improvement, including micro grids, increasing energy efficiency, and reducing greenhouse gas emissions. The Act includes $2.5 billion to facilitate the construction of transmission lines and related facilities. The Act also includes $3.0 billion of funding for technologies which enhance electric grid flexibility.

Nuclear power is a zero-carbon source of electric production
and will be a key component of net-zero carbon power generation portfolios. Cheap natural gas generation has placed market pressures on nuclear plants which has led to nuclear plant closures over the last several years. 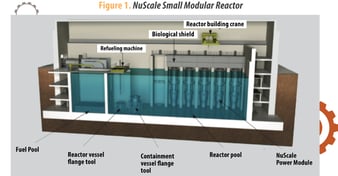 The closure of nuclear
plants and replacement with natural gas generation has caused an increase in greenhouse gas emissions. In an effort to stem the closure of nuclear plants, the Act includes a $6.0 billion Nuclear Credit Program to prevent future closure of nuclear plants caused by economic factors. Nuclear power also has the potential to play a role in reducing the cost of hydrogen production and is included in the technologies eligible for funding through the fuels and technology infrastructure, and the clean energy demonstration programs portions of the
legislation. Last, the legislation includes over $3.2 billion in funds for advanced reactor programs.

A net-zero carbon electric industry future will require a flexible, clean, and affordable fuel to ensure our electric grid remains reliable. Leading energy officials and scientists see hydrogen as a possible answer for the utility industry because many of the current power generation plants can be converted to burn hydrogen. In addition, as renewable resources grow, hydrogen could become a viable alternative to batteries for storing excess renewable energy production for use during other periods. The
problem is net-zero carbon hydrogen production, also called green hydrogen, is expensive to produce, lacks transportation infrastructure, and storage. Because current demand for green hydrogen is low, investment in green hydrogen technology and large-scale projects is lacking. The Act includes $8.0 billion to establish four regional clean hydrogen hubs to demonstrate the
production, processing, delivery, storage, and end-use of clean hydrogen. There is $1.0 billion targeted toward improving electrolyzer efficiency R&D, demonstration, commercialization, and deployment. Another $500 million is targeted toward advanced clean hydrogen manufacturing and recycling research/development.

Battery technology and availability of critical materials is a critical issue for competitiveness of US industries. Utility scale
battery storage is necessary to accomplish any net-zero carbon energy future. The June 2021 White House report, "Building Resilient Supply Chains, Revitalizing American Manufacturing, and Fostering Broad-Based Growth" identified the need to establish a resilient supply chain for critical materials to ensure US is able to secure critical rare earth metals for use in manufacturing parts, equipment and systems. Lithium Ion used in much of the utility scale battery systems, is a good example of a rare earth metal which will be in short supply, with projected growth of 4,000% by 2040. The act includes $627 million to establish rare earth demonstration facility, mapping of rare earth resources in the US, and research. The Act also includes programs to address lithium ion and battery recycling. One program provides $200 million to improve electric vehicle (EV) battery design, recycling, and second life applications. One potential second life application is the use of EV batteries in the utility industry for use in resiliency projects and other applications. The largest portion of battery funding included in the Act, $6.0 billion, is targeted toward battery manufacturing and recycling. The recycling effort is targeted at recovery of critical elements needed in battery manufacturing. The legislation also includes $505 million for energy storage demonstration projects.

The technology to extract carbon dioxide from power plant or industrial process emissions has been around since the 1930’s. The process results in creating almost pure C02 that then must be transported and stored. The problem is where to place all the potential CO2 that could be removed from power and industrial processes and how to get it there. 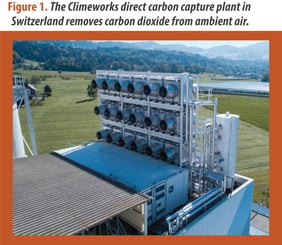 The Act recognizes the importance of cybersecurity in protecting the US electric infrastructure from cyber-attacks. The legislation includes provisions for establishing self-assessment and auditing methods, establishing testing processes for cybersecurity products, technical assistance to utilities, and
cyber-attack response and recovery funding. It establishes a $1.0 billion grant program to fund state and local governments to assess cybersecurity risks. It also includes $100 million Cyber Response and Recovery Fund that can be used for reimbursement and technical assistance associated with cyber-attacks.

In addition to approving the Act legislation, the House is also
working on $3.5 trillion budget framework that includes programs of importance to the electric utility industry. Between these two legislative packages, there could be major changes in policies on climate and clean energy programs. Once all the legislation is passed into law, the various federal departments will need to turn the various legislation provisions into programs for implementation. Its good for electric utilities to follow the legislation activities because of the impact on various aspects of the business model. It is helpful to consider developing strategies regarding various facets of the legislation and the potential benefits that could be obtained for electric utilities retail customers.