FERC ROE Policy In A Flux: What's Happening & Why It Matters

For supposedly a slow-moving industry, there is a lot going on in the electrical industry. One area that may not grab the headlines but is no less important, is the Federal Energy Regulatory Commission’s (“FERC” or the “Commission”) policy on Return on Equity (“ROE”). This rate sets the regulated profit for investor-owned utilities in respect of their FERC regulated transmission assets and plays a significant role in how much wholesale transmission customers and many retail ratepayers pay for transmission service. With no slow down expected in transmission construction across the country, the importance of return on equity will only increase. For the last few years, FERC’s policy on this front has been mired in somewhat of a vacuum following a DC Circuit court remand of a 2014 FERC decision in an ISO New England case, but more recently the Commission has reignited the debate by proposing a drastic change in how it determines a just and reasonable ROE as part of its response to the court’s remand. In this article we look at what exactly the Commission is proposing and how coops and municipalities can continue to protect their members and retail customers in this time of FERC ROE Policy flux.

EVOLUTION OF FERC POLICY AGAINST A BACKDROP OF CAPITAL DECLINE 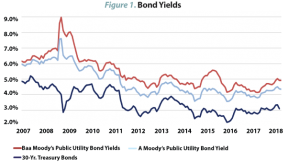 Before delving into the detail of the proposed new framework, it is helpful to first consider the backdrop of declining capital costs in which this FERC policy debate is set. Over the last decade or so we have seen a continued decline in capital costs and in the capital cost for electric utilities in particular. For instance, the calendar year 2007 Moody’s Baa Rated Public Utility Bond yield was 6.30% and in 2018 it averaged 4.67%, a substantial decline of 164 basis points in the cost of debt. As Figure 1 illustrates, there were peaks and troughs over the period in response to different market conditions but the general downward trend is clear.

As seen in Figure 2, a corresponding decline in awarded ROEs in FERC proceedings is evident.While the Commission adjudicates ROE matters, in many instances intervening parties reach a settlement before the case reaches a more formal and costly FERC trial/hearing process. Upon review the Commission may, and typically does, accept these settlement agreements. Settling parties in more recent years have had to work within the confines of an unsettled FERC policy following the appeals made to the D.C. Circuit court and subsequent remand of the ISO New England Order, but nevertheless settlements have still been reached. While the focus of this article is on FERC ROE policy it is noteworthy that ROEs determined as part of state commission proceedings, which operate under the same capital market conditions, have also declined significantly over the 2007-18 period. 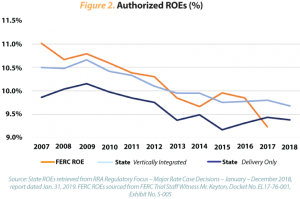 In 2014, at a time when the average base ROEs was below 10%, FERC’s ROE policy began to shift, sowing the seeds for its more recent and arguably radical proposed ROE framework. In June 2014, the Commission issued Order Opinion No. 531 in relation to the ROE complaint involving the transmission owners of ISO New England. This Order can be viewed as taking one step forward and two-steps back in terms of its alignment with the Commission’s broader ROE policy at the time. In terms of alignment, the Commission synchronized the particulars of the DCF methodology for electric utilities with the methodology that had long been applied for natural gas and oil pipelines, known as the two-step, constant growth DCF method which considers both short and long-term growth rates. For electric utilities it previously relied upon a one-step, constant growth DCF method which only included short-term growth rates. Notwithstanding this particular alignment, the Commission determined in the now vacated Order, that based on the unique and anomalous capital market conditions prevailing at the time, that it needed to consider the ROE estimates from other non-DCF methods in determining the DCF range of reasonableness to select the authorized ROE point estimate for the subject electric utilities. This was despite the Commission’s acknowledgement that all utilities face the same national macroeconomic and market conditions.

Now the Commission has proposed to take its reliance on non-DCF methods a step further by explicitly augmenting the use of the DCF method with three other models, namely, the Capital Asset Pricing Method (“CAPM”), Expected Earnings and Risk Premium models and to weight the results from each model equally in the determination of a just and reasonable ROE. Additionally, to develop a composite zone of reasonableness, FERC proposes to rely on the DCF, CAPM and Expected Earnings models, but not on the Risk Premium model, as this model only produces a single point estimate as opposed to a range. 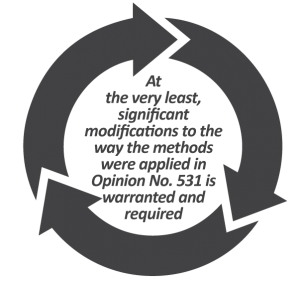 This proposed framework represents a major shift in policy on a number of fronts. First, the Commission has relied exclusively upon the DCF methodology for several decades, since the early 1980s, to determine a just and reasonable ROE for a public utility. Even its decision in Opinion No. 531 was ultimately within the confines of a range of reasonableness determined by the DCF method. Second, putting any weight on an accounting return method, such as the Expected Earnings method, which is completely devoid of market input, violates the Commission’s long-standing view that the best way to meet the standards set out in the landmark Bluefield and Hope Supreme Court decisions is through the application of a market-based cost of capital estimate (e.g. the DCF method). Third, in Opinion No. 531, the Commission expressed concern regarding the reliability of the non-DCF methods it is now proposing to directly utilize and concluded that they were “sufficiently reliable – not to set the ROE itself – but rather to corroborate our decision.” Therefore, it is quite a change to now propose to directly rely upon these alternative methods in the determination of the ROE. At the very least, significant modifications to the way the methods were applied in Opinion No. 531 is warranted and required. From a review of FERC trial staff’s testimony filed in the paper hearing proceedings, it is clear that they also consider that significant modifications are necessary. Thus, we are not alone in our thinking.

The transmission system has experienced a significant and sustained level of investment over the past 10 years. The is readily apparent from Figure 3 which shows utility investment in transmission infrastructure was around $10B in the late 2000s to $20B in each of the last five years. This significantly up from the $2B a year level seen in the 1990s. The drivers for this investment can be summarized into three broad categories: (1) aging infrastructure replacements and upgrades, (2) integration of new renewable and gas-fired generation, and (3) system resiliency, security, and protection.

The ROE component of a utility’s FERC approved transmission formula rate accounts for a significant part of the overall revenue requirement. The ROE component is a function of the ROE rate times the rate base and acts as the utility’s profit, from a regulatory perspective, as all the other components are cost pass through items  e.q. operations and maintenance expenses, depreciation expense and taxes. The specific contribution from the ROE return to the overall revenue requirement will vary from utility to utility but its contribution is always significant. Therefore, given the dollars involved, it is critical the ROE rate is just and reasonable.

Moreover, cooperative and municipalities can see real savings from a reduction in the ROE rate. For instance, under the PSE&G 2017 formula rate, if a cooperative or municipal has peak load of 200 MW, as measured for transmission service, its transmission charge would be $24.75M. If the base ROE were reduced by 100bps, from 11.18% to 10.18%, the charge would be reduced to $23.45M, a reduction of $1.3M or 5% (note for simplicity this example ignores any interactions related to regional PJM projects). Additionally, this would be an annual on-going saving, until the ROE rate was changed once again, and its effective value would increase as the transmission rate base increases.

WHAT AVENUES ARE AVAILABLE TO ENSURE JUST AND REASONABLE ROES?

There are two primary regulatory avenues directly related to the ROE that a cooperative or municipality can pursue depending on whether the ROE at issue is an existing ROE or a one that is newly requested by the transmission utility. Regarding an existing ROE included in a FERC regulated formula rate, a customer can challenge the just and reasonableness of this rate on the basis that the economic environment and capital markets have changed substantially since the ROE was approved. While the Commission’s proposal includes a rebuttable presumption that existing ROEs are just and reasonable if it is within a certain bandwidth, this restriction and the various ROE methods proposed to be used to develop the bandwidth are not yet finalized. Additionally, there has been no new ROE complaints filed since the Commission has issued its proposed framework and therefore this aspect has not been tested at the Commission making it difficult to assert how restrictive this aspect will be in the meantime.

Separately, customers have an opportunity to oppose a new ROE requested as part of a new FERC regulated formula rate filing by protesting this aspect, along with other aspects of the formula rate. The burden is on the filing owner to justify the just and reasonableness of the requested ROE. Importantly, the Commission has not proposed to apply the rebuttable presumption of just and reasonableness to new ROE requests but only to existing ones. There are also alternative non-ROE routes available to hedge against increasing transmission charges or other FERC regulated formula rates. One approach is to partake in the annual review of the transmission formula rate true-ups or updates and challenge items that are inappropriately included in the rate. This effort can result in significant savings. For example, a review may identify that distribution expenses are erroneously included in transmission regulatory accounts.

The Commission’s proposed new ROE framework represents a major shift in its policy direction and is expected to result in an upward tick in ROEs if adopted as-is. The Commission, transmission customers and other stakeholders will need to closely scrutinize its merits as part of the paper hearing and NOI proceedings to ensure the policy continues to balance the interest of investors and customers as set out by the landmark Supreme Court decisions. Given the significant role the ROE plays as part of the overall transmission charge, and its ever-increasing importance due to continued investment growth in the transmission network, cooperatives and municipalities would benefit from pursuing available avenues to ensure that ROEs are just and reasonable and overall efficiency of transmission or other formula rate charges is achieved. 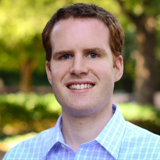