According to the Environmental Protection Agency (EPA), 27% of the total U.S. greenhouse gas emissions are attributable to the transportation sector. Significantly reducing these emissions can be achieved through electrifying cars and decarbonizing power supply. Therefore, electric vehicles are a key focus of plans to help solve climate change. Since 2010, over 2.5 million plug-in hybrid electric vehicles (PHEV) and battery electric vehicles (BEV) have been sold nationwide. In just the last year, BEV sales increased by 85% in 2021 and PHEC sales more than doubled (138% growth).

Projections for the number of electric vehicles are difficult to determine since the technology is in the early stages of the adoption lifecycle. However, projections range from 10 million to 30 million electric vehicles on the road by 2030. A survey of eight major corporations found that respondents plan to purchase over 375,000 zero-emission vehicles over the next five years. Additionally, President Biden has set a goal of bringing the nation’s emissions down to net zero by 2050. The average light-duty vehicle operating in the U.S. is 12 years old, and vehicle lives range from 15-20 years, indicating an aging national fleet of internal combustion engine (ICE) vehicles that are primed for replacement. Finally, Ford, GM, Subaru, Mercedes-Benz, and Volvo plan to phase out sales of new ICE vehicles by 2035, at which point more than half of the vehicles being sold in the U.S. will be BEVs.

Is the oncoming growth in PHEV and BEV a problem for electric utilities or an opportunity? These new loads might add to peak demand on the grid which could mean increased distribution infrastructure capacity and additional peaking generation and transmission investments. This could be a problem for utilities. However, others see the opportunity associated with increased energy sales and revenues.

What can utilities do to ensure this transformation in how America drives represents an opportunity that minimizes the problem? The average American household has 1.81 vehicles. As the number of all vehicles in a utility service area increases and as the share of those vehicles that are electric increases, the likelihood of a household having two electric vehicles in the garage increases, which has the potential to stress the existing electric infrastructure, specifically the service transformer and feeders. To fully define the potential threat for electric stress on the system, it is necessary to understand the
charging options for the vehicles and some of the human factors involved in charging decisions and habits. Recent research out of California (currently home to over 40% of all U.S. electric vehicles) and from EPRI on behalf of the Salt River Project provide some information helpful to defining the problem.

There are essentially three basic charging methods available today: Level 1, Level 2, and DC Fast chargers. Level 1 chargers will generally require 10 or more hours to fully charge a nearly depleted battery and could represent a 30%-40% increase in peak demand for a home with a peak of 3.5-4.5 kW. Level 2 chargers will charge a battery in 2-4 hours and can represent an increase to demand of over 250%. Furthermore, installation of a Level 2 charger may require the homeowner to upgrade to a 400-amp panel. DC Fast Chargers (Level 3) can charge vehicles up to 80% charge in as little as 30 minutes. These fast chargers are normally installed at shopping centers, hotels, and other commercial centers and tend to be used throughout the day thus providing less coincidence with system peaks.1

Another variable to consider is the state of charge (SOC) of the battery at the time the vehicle is plugged in. A battery that is near empty (5% SOC) will take longer and require more energy to charge than a battery at 80% SOC. Therefore, not all Level 1 chargers will operate all evening to produce a fully charged vehicle battery since some vehicles will have a 50% or 80% SOC at the time they are connected to the charger. The Salt River study found that 70% of the charge events occurred with the battery at SOC of 40% or higher.2Range anxiety for the vehicles seems to be a partial if not leading reason for this fact. Owners fear running out the battery away from a charger. As evidence of this, the Salt River study tracked 100,000 trips that totaled only 915,000 miles, or 8.6 miles per trip while most BEVs now have ranges of 150 miles or more per charge. Furthermore, 99% of the trips were less than 65 miles, easily obtainable on a single charge. Increasing the number of public charging stations to ease range anxiety has been identified as a key infrastructure improvement necessary to encourage faster BEV adoption.

Along with the type of charger and the SOC, the timing of when cars are plugged in and drawing from the charger is important for electric system planning. Many of us assume that BEV owners plug in their vehicle every night and charge to 100% SOC. However, a California study, Distribution Grid Impacts of Electric Vehicles, found otherwise.3 They found most EV drivers charged their vehicles between 4 p.m. or 5 p.m. and midnight but that another group of drivers started charging at midnight due to automatic charging timer delays. Such delays are often the default factory setting. The typical charging time was 2 to 4 hours. The study used this data to develop an aggregated load curve of 1,000 BEVs. The curve had a peak demand of 1.5 MW plus or minus 30%, rising sharply at 7 p.m., peaking at midnight, and having minimal charging between 6 a.m. and 6 p.m.

One option is the use of time-of-use (TOU) rates. TOU rates provide a price signal to the customer to encourage charging during off-peak periods. Difficulties in TOU rate design can abound though, including whether to implement the rate for all residences, whether to submeter just the charger or subject all consumption to the rate, and how to structure the rate to appropriately incentivize the behavior in the utility’s best interests. Several independent analyses show an on-peak price to off-peak price ratio of at least 3-to-1 is necessary to begin to “move the needle” in any meaningful way on customer consumption patterns.

Another option for utilities to influence driver behavior is demand-side management of the vehicle charging. This represents firm utility control of the load and requires utility incentives. This strategy can be implemented through a number of methods. 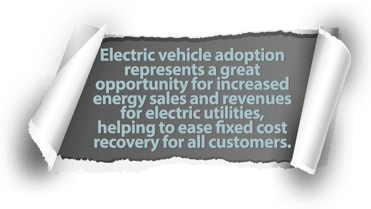 A common method is control over a Level 1 or Level 2 charger (programs often target Level 2). Similar to an AC control program, the utility can control the charger to be inactive during likely peak events. Sometimes, the program has an opt-out option for customers. This type of control requires communication infrastructure and the ability to communicate with the charger. Options include providing a “free” programmable charger, intelligent breakers in the disconnect panel, or even communicating directly with the vehicle through Wi-Fi.

Other opportunities for utilities to manage BEV demand risks are evolving. Electric vehicles may not have significant impact on most electric infrastructure systems today, but the change is not too far into the future. Therefore, utilities should be preparing for control of charging through rate design, load management, and other approaches to maximize the opportunities afforded by adoption of electric vehicles while minimizing the potential problems.

References:
1 The load factor on a DC Fast Charger is often 10% or less.
2 The study tracked the SOC of a set of 100 BEVs over an 18 month period.
3 The Study logged data from 233 unique EVs consisting of the 6 most popular vehicles over the course of a year. They recorded 52,146 separate charging events and 2.99 million miles traveled.