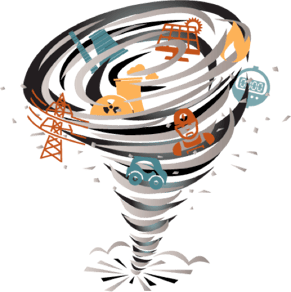 Recent technological and economic changes are expected to test and transform the electric utility industry over the next decade. Which opportunities or threats are most likely to cause a paradigm shift among the industry and its stakeholders? How can utilities plan for and embrace the rapidly changing environment while also effectively managing the ever-changing regulatory and legislative environments?

For the past 100+ years, electric utility companies have enjoyed limited competition and had unprecedented access to low cost capital. Due to economies of scale, the centralized generation and bulk transmission system model was consistently cost effective. The monopoly utility provided a safe and reliable service while regulators allowed it to earn a reasonable, low-risk return. However, due to recent technological and economic changes such as renewable/distributed generation options and the Great Recession, the traditional utility business model may face some unique threats over the coming decade. In May, Barclays downgraded its view on electric utility corporate bonds to “underweight” from “market weight,” citing a confluence of unsettling factors that will likely disrupt the current model.

Utility Dive, an online energy news dashboard, surveyed 527 U.S. electric utility professionals on the state of the industry in 2014. The first question asked, “What are the most pressing challenges for your utility?”  The top answers were:

These disruptive challenges may cause utilities to sell less kWh at ever-increasing prices and, in turn, produce an unsustainable business model. 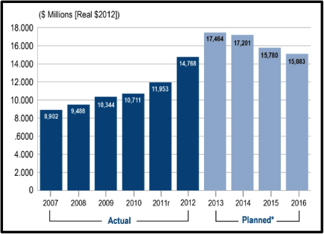 Basic infrastructure – Electric transmission and distribution lines, gas pipelines, hydroelectric dams – and the workforce that maintains this infrastructure are central to the core mission of electric utilities. The American Society of Civil Engineers (ASCE) published its Report Card for America’s Infrastructure, which graded the current state of the U.S. infrastructure on a scale of A through F. ASCE’s 2013 Report Card gave the nation’s energy infrastructure a D+. America relies on a well-worn electrical grid and a gas pipeline distribution system, some of which originated in the 1880’s. Transmission investment has continued to increase since 2007 [see Figure 1], but ongoing permitting risks, weather events, and limited maintenance have contributed to an increasing number of failures and power interruptions. The Brattle Group estimates that the need for additional transmission investment to integrate renewables and maintain reliability through 2030 is in the range of $240 – $320 billion. If you include possible upgrades for a national ‘smart grid’ system then the estimate increases to $600 billion.
ASCE gave America’s dams a D grade. The average age of the 84,000 dams in the country is 52 years. The U.S Army Corps of Engineers estimates that more than $25 billion will be required to repair deficiencies at Corps-owned dams. In addition, the time it takes to complete these projects drives the cost up and creates enormous backlog. If funding at the Corps remains at current levels, the 22 planned major construction and rehabilitation projects will not be complete until the year 2090.
Electric utilities will depend on their utility workforce to upgrade these infrastructure projects. The Department of Labor estimates that the energy sector employs about 1 million people nationwide, and the average age of utility workers is now over 50. Projections show that up to half of the energy workforce – more than 500,000 workers – will retire within 5 to 10 years. Employers will incur considerable costs either to keep the elder, highly experienced employees from the Traditionalist (age 68+) and Baby Boomer (age 49-67) generations or develop the resources to train new, unskilled employees to construct new power plants, incorporate DG technologies, and tap shale oil and gas wells.

Energy efficiency measures gained traction with U.S. consumers as a cost-cutting measure in response to the Great Recession. A 2014 Deloitte Energy Consumer Survey gave 1,500 online interviews and found that 75% of consumers are now committed to being informed and consider themselves aware of national energy issues. Resourcefulness remains hard-wired in the minds of consumers affected by the recession and there is a desire to maintain or reduce electricity consumption. [see Figure 2]
Energy efficiency may not have been viewed as a disruptive technology in the power industry several years ago, but its growth is having a dampening effect on electricity demand and forcing some utilities to alter their businesses. With demand no longer growing at past rates, utilities are having to spread the cost of increasing infrastructure investments among their customers. As rates rise, demand-side management and rooftop solar become more attractive, which can further reduce energy sales. Lower sales could lead credit-rating agencies to further downgrade debt issued by utilities, thereby increasing utilities’ cost of capital. This is affectionately known as the “utility death spiral.” Some analysts believe that the inflection point, where rising grid power costs meet falling self-generation costs, will arrive in the next decade. 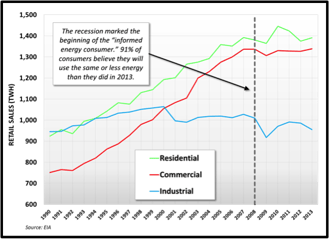 State regulators are increasingly applying policies that incentivize utilities to invest in energy efficiency projects. Nevada and Wisconsin allow utilities to earn a return on efficiency investments roughly equal to the return on building supply-side power plants. This has the potential to encourage more utilities to transition away from a sales-based model. Regulatory reforms such as decoupling profits from energy sales could overcome the inherent disincentives regarding energy efficiency.

The Rise of Distributed Generation

The national coal and nuclear generation fleet is rapidly deteriorating. Existing and future regulations will result in the retirement of coal plants across the country. Replacing those power supply resources will likely include less-intensive carbon or zero-emission options such as natural gas plants and renewables. Driven by federal and state incentives and declining costs, DG is expected to continue to gain market share. While natural gas is the primary fuel source for DG applications today, solar power has the potential to become the leader in DG applications. The price for installing rooftop solar panels has plunged in the last few years. NREL states that from a utility perspective, wholesale solar in 2012 cost $2.34/wattDC, a decrease of nearly 40% from the 2010 price of $3.80/wattDC.
Prices are dropping for several reasons:

According to a Deutsche Bank report, solar photovoltaic capacity is already at retail grid parity in 10 states, and that number will likely double within 18 months. Installed solar PV capacity is likely to grow from 8.5 GW to 50 GW by the end of 2016 in the lead-up to the scheduled expiration of the 30% investment Federal tax credit at the end of that year.

Distributed electricity storage is slowly creeping into the DG conversation. Whereas other technologies, including solar PV, net metering and energy efficiency, still require grid dependence, solar coupled with storage technology could enable customers to cut the cord to their utility entirely. Market penetration for this type of system is very small today but there is potential for growth.

One Tesla Model S can store enough energy to power the average US household for 3.5 days.

A good example of the potential growth for energy storage is found at the Tesla electric vehicle company. In order to bring their Lithium-ion battery prices down, Tesla is proposing to build a ‘Gigafactory’ to manufacture Li-ion batteries on a massive scale. Tesla believes the price of Li-ion batteries world-wide will be reduced by 50% (by 2020) and allow them to produce 500,000 EVs per year.

By comparison, Tesla’s 40,000 vehicles on the road today can hold 3.3 GW of storage capacity which is equivalent to 0.3% of U.S. generating capacity and 14% of grid-scale storage. Morgan Stanley estimates that there will be 3.9 million Tesla cars on the road by 2028, which will be able to store 237 GW of capacity or 22% of total U.S. generating capacity. The projected decrease in cost of Tesla’s batteries and DG could significantly challenge the relationship between utilities and their customers.

To prevent old infrastructure from impeding growth of the U.S. economy, considerable investments need to be made to the energy T&D system, pipelines, dams, and in replacing the retiring utility workforce. As recent demand growth has been very low in many utility territories, utilities and marketers are trying to capture business opportunities by working with more energy-conscious consumers. Instead of focusing strictly on commodity sales, utilities will need to expand their offerings by considering opportunities with energy efficiency programs, demand response programs, and distributed generation alternatives that will enable the electric utility to offer a suite of services to help consumers achieve their goals of highly reliable and cost-effective energy. The future will belong to forward-thinking utilities that can continue to bring about change through stakeholder consensus-driven initiatives.