The Sun Will Come Out For Utility Scale Solar Projects

Many of us working in the electric industry can remember the days where the tinkerers would add solar to their roof tops to save on their power bills. We roll our eyes and scoff that the pay back is forever, even with tax incentives. Well, times have changed because utility scaled solar projects (500 kW – 10 MW) are now at a low enough cost that the energy generated will be less than the typical retail cost of energy. At $4,500 per kW, solar generation was once an extremely high cost asset, but now, electric utilities are executing engineering procurement and construction (EPC) contracts for less than $1,200 per kW (excluding any tax incentives) which translates into about 6.5 cents per kWh. At $1,200 per kW, the utility owned-solar is very viable in today’s market place. Experts expect for installation cost to continue to trend favorably, because installed solar costs in Germany have bottomed out at $900 per kW and German installers use the same solar panels as the US installers. Figure 1 shows that utility scale solar is becoming the next low cost option for energy. 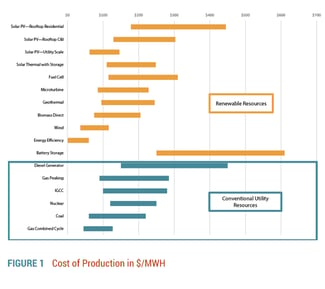 In Georgia, a major change in the industry occurred when Georgia Power was recently compelled by the Georgia Public Service Commission to procure 500 MW of solar resources. Then, late in 2014, a group of electric cooperatives in Georgia contracted for 130 MW of solar power. This buying spree created competition in the solar market which has driven down costs partly by reducing margins in the solar plants – this is known as commoditizing the solar assets. The commoditized prices provide leverage for electric utilities across the country to own solar assets rather than rely on a developer to own and operate the asset.
Tax incentives for solar resources influenced a market model where developers built and owned the solar assets. Public power cannot directly take advantage of those tax incentives and thus have been looking at developers to provide the resource. The falling cost of the components to build solar plants and future expiration of tax incentives are changing the market. Furthermore, many jurisdictions are requiring electric coops or PUDs to acquire some percentage of their power from renewable resources. Electric utilities should be thinking of potential benefits of direct ownership of solar resources. Solar has become particularly compelling for public power because they have access to low cost capital and a connection to their members for personal investment in the power production.

Utility ownership of the solar asset adheres to the public power principals of providing low cost power because margins for the asset are retained to benefit the members/public, rather than the developer. Another reason this is possible is because the risk of owning and operating solar is greatly reduced. The technology advances coupled with warranties offered by manufacturers result in a more robust asset that requires minimal maintenance; such as cleaning panels, mowing vegetation, and maintaining the inverters and SCADA connections. All of the skills necessary for this maintenance are inherent in most utilities.

For utility scaled projects, there are essentially two sizes: Transmission scale (over 20 MW) and Distribution scale (less than 10 MW).

Over 20 MW in size will generally require a dedicated substation to interconnect the generation resource to the electric grid. Less than 10 MW, the solar site can be interconnected to a distribution feeder. On the lower end of the distribution scale, a 1 MW plant could be installed 3 to 5 miles from the substation and interconnected using a standard line recloser. Further out on the feeder, the solar plant will help reduce line losses, and provide var support as well as voltage support. In fact, the placement of distribution scale solar plant is very analogous to the placement of a switched capacitor bank.

The modular nature of solar plants less than 10 MW in size still provides the economy of scale normally thought to exist with large power production resources. Said another way, a 1 MW plant will cost only modestly more than a 10 MW plant in terms of capital investment per kW of actual solar equipment installed, but could in some cases reduce the required investment in support infrastructure (substation & transmission) and land cost, which could result in an overall lower cost/kW for solar in the aggregate. Thus, it is possible to think in terms of multiple 1 MW to 3 MW solar plants scattered within a distribution system rather than a single large resource. Each 1MW of solar capacity requires about 8 to 10 acres to accommodate the solar panels. So, small scale projects require less contiguous land. 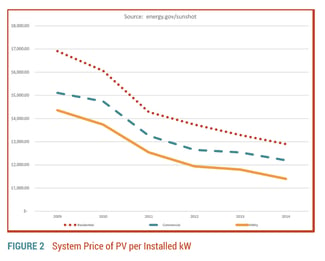 In the future, especially in light of the current movement towards localized distributed generation, distribution scale solar plants will look and feel more like standard distribution plant-like capacitors, SCADA, and AMI facilities. The solar assets will support the distribution system and will be maintained just like any other asset on the system. This is in contrast to a customer-owned solar asset which is not controlled by the utility and must strictly adhere to interconnection standards. As a utility owned resource, the utility can control output functions including var support and lock-out of the resource during line maintenance. Further, many jurisdictional authorities have saturation standards for distributed generation. Meaning, there is a limit to the total aggregate of distributed generation that can be installed on a feeder which is typically 5% to 20% of the feeder’s annual peak demand. These saturation limits are a limitation for system stability, for example, Hawaii has a moratorium for new residential solar due to high saturation levels. Similar problems are occurring in Germany. Utility owned distributed generation will qualify for the aggregate total thus potentially limiting the capacity available to other owners of distributed generation.

Through utility ownership with potential subscription of the solar asset to customers, the utility has a means to control or at least influence the erosion of the fix cost recovery while also offering a lower cost alternative to retail customers who really want to “own” solar or have their energy consumption sourced from a renewable resource. This could curb the amount of distributed generation connected to the grid through net metering agreements with individual retail customers.

GDS can provide assistance with all aspects of developing utility scale solar plants excluding physical construction. As such, GDS can serve as an unbiased ally when considering how to effectively employ solar for an electric utility.

Electric utilities have a number of factors to consider when deciding whether or not to invest in utility scale solar assets; from general concept evaluation, to placement of the resource, design, construction management, and everything in between. During this process it is helpful to conduct portfolio analysis of solar resources and risk analysis of new assets/contractors, evaluate transmission access and congestion issues which are critical for transmission scale projects, and manage the integration requirements, including determining cost effective placement of a solar asset, permitting the site, procurement support, design services, construction management and development of maintenance plans. GDS as an engineering and consulting firm can provide assistance with all aspects of developing utility scale solar plants excluding physical construction. As such, GDS can serve as an unbiased ally when considering how to effectively employ solar for an electric utility.For more information or to comment on this article, please contact: 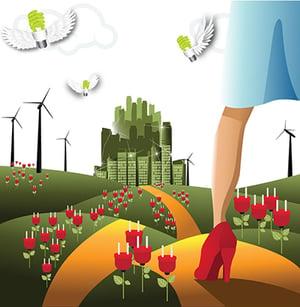 As 2015 begins, many electric utilities seeking guidance relating to best practices for the design, implementation and evaluation of EE & DR programs. This article presents a snapshot of the latest information on such EE & DR best practices and provides citations to best practices studies developed by the National Action Plan for Energy Efficiency.

You have likely heard that “it doesn’t matter what road you take if you don’t know where you want to go.” The first step for EE & DR planning is to develop a sound business case for implementing such programs. The business case should define the reasons that your organization is pursuing EE & DR. Developing this business case includes reviewing a comprehensive list of EE & DR benefits and costs and making a decision if your utility or organization finds that such programs are cost effective, can help comply with laws and regulations, or meet customer needs and preferences. The second step is to conduct an energy efficiency/demand response potential study to identify the EE & DR options that can save the most energy and are the most cost effective.

The results of such a study can help your organization set priorities for program design and implementation, since most organizations do not have unlimited budgets for EE & RD. An excellent guide for conducting such EE/DR potential studies is the November 2007 National Action Plan for Energy Efficiency “Guide for Conducting Energy Efficiency Potential Studies.”1 The results of the potential study provides the roadmap that an organization needs to design and implement cost effective programs that will achieve meaningful energy savings. A recent example of a completed energy efficiency and demand response potential study is the November 2013 potential study for the State of Michigan.2 This study is available at: https://www.dleg.state.mi.us/mpsc/electric/workgroups/mi_ee_potential_studyw_appendices.pdf

EE/DR Potential Studies can help your organization set priorities for program design and implementation, since most organizations do not have unlimited budgets for EE & DR.

Utilities and government agencies in the US and Canada have been implementing effective EE & DR programs for decades. The first step with program implementation is to develop a detailed program plan. The program plan should include the following information:

The program plan should include an assessment of the 1) remaining energy savings potential for the program and 2) program cost effectiveness. Generally, programs should be designed so that they have a benefit/cost ratio greater than 1.0. There are often additional criteria to consider, such as making sure that there are programs for all customer classes (i.e., residential, commercial, industrial, other) and for low-income and hard-to-reach customers, that programs have continuity, and that programs provide for energy efficiency education. There may also be other utility, regional, or policy factors to consider in developing the energy efficiency program.3 It is often helpful to examine existing program plans that are available in filings made by utilities with state regulatory commissions. For example, one can find the most recent program plans developed by all seven investor-owned electric utilities in Pennsylvania on the web site of the Pennsylvania Public Utility Commission.4

Energy efficiency impact evaluations are conducted to determine actual energy savings (versus predicted estimates) attributable to an energy efficiency or demand response program or measure. Process evaluations assess how efficiently a program was or is being implemented, with respect to its stated objectives and potential for future improvement. All energy efficiency program categories can be assessed using process evaluations. Findings and recommendations from regular impact and process evaluations can be used to continuously improve programs to make them more efficient and cost effective. In addition, evaluations often include cost-effectiveness analyses that document the relationship between the value of program results (i.e., energy, demand, and emission savings) and the costs incurred to achieve those benefits.5

Due to increasing concerns about climate change, national energy security and volatility in fossil fuel prices, electric and natural gas utilities and government agencies in the US and Canada are increasing commitments to energy efficiency and demand response programs to meet the energy needs of residential, commercial and industrial consumers. The Consortium for Energy Efficiency reports that US and Canadian combined gas and electric Demand-Side Management (DSM) program budgets reached $9.6 billion in 2013, representing a 2% increase over 2012 DSM budgets. US and Canadian combined gas and electric DSM program expenditures reached $8.0 billion in 2012, representing a 9% increase over 2011 expenditures. If you are a decision-maker in a utility or government agency that is interested in expanding the EE & DR offerings of your organization, the best practices and methods outlined in this article provide guidance on where to find the data, analytical techniques and case studies to jump-start your energy efficiency and demand response initiatives.